Choosing one of the top 10 marathons in China is a bit daunting not due to limited choice, but because there are so many races taking place. The marathon trend is booming and today, some of the greatest endurance runners in recent history have competed in China. If you are a runner and you are looking for the challenge of a lifetime, China is the place to be. Even a simple check on the search engines can show you just how many marathons in China are taking place at one time or another every year.

In this article, you will see 10 of the best marathons in China. You can choose your race and find out when and where it will take place. Some of these races are decades old and some are pretty new. Almost all of them are run on asphalt and unpaved ground, which is mostly flat.

Continue reading to see some characteristics of the most popular marathons in China: 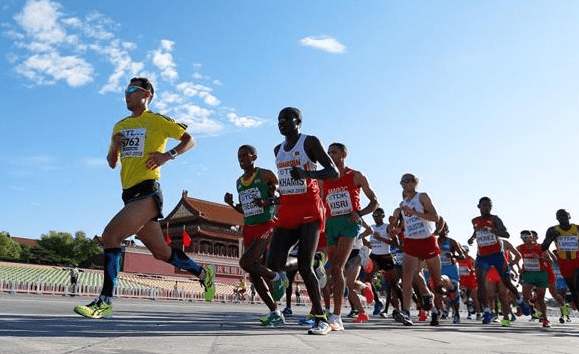 The annual Beijing Marathon is held in October in the city of Beijing in the People’s Republic of China. It covers 42.195 km. The first Beijing Marathon took place in 1981 and since then, it has taken place every year. It begins at the Tiananmen Square and the finish line is at the NOSC – National Olympic Sports Center.

Organized by the China Athletics Association since its establishment in 1981, this marathon attracts many champions from all over the world. There has been Chinese, Korean,Kenyan, Ethiopian, Japanese and other champions over time. Men and women alike run this marathon.

There has been some notable events happening with or in this marathon. One of them was when Benson Kiprono of Kenya won by unanimous decision even after missing the finish line as he was misdirected by 800 meters. He was declared the winner after the race officials admitted to the mistake.

This is among the top 10 marathons in China. It is certified by the International Association of Athletics Federations (IAAF) and it has won the Gold Label Road Race award for four years. The Shanghai International Marathon happens in late fall in the city of Shanghai in China. It follows a meticulous route through the city, starting at Bund Bull, Jin Niu Square and finishes at the Shanghai Stadium. The distance is 42.195 km.

As one of the top marathons in the country, it attracts thousands of marathoners from different parts of the world. There are many sights to take in along the race route, which follows a good route through the city.

Some of the most notable things to see along the race route include the Huangpu River, the Shanghai Museum, Nan Pu Bridge, Long Hua Temple, Pudong, Lu Pu Bridge, The Bund, Peace Hotel and Fu Xing Park.

Established in 1996, Shanghai International Marathon is Gold Marathon-certified by China Athletics Association. It is also an IAAF Gold Label Race. It registers 28000 runners for the full marathon, and 5000 runners in the 10 km distance. The course is generally flat and paved with asphalt and runners get free photos at the finish line. The China Athletics Association in conjunction with the Guangzhou Municipal People’s Government organize the Guangzhou Marathon. The entry quota for this marathon is 30000. The full marathon takes 18000 runners while the half marathon takes 12000. The quota allocation changes each year. The race usually starts at the Tianhe Sports Center/South Square and the finish line is at the Huacheng Square.

Despite the cold weather of December, participants come from many countries. For example, close to 50 countries were represented in December 2018. This race was established in 2012 and it has taken place ever since. It will grow more in popularity after getting the Gold Label Road Race status by the IAAF in 2018.

The biggest part of the route runs alongside the Pearl River. There are many attractions along the route. Marathoners get to see some tenets of the Lingnan culture. Registration for the marathon or half marathon starts in June and ends in July. For the full marathon, you must be at least 20 years old  and at least 16 years old for the half marathon. The Wuhan Marathon runs a long a flat route. It starts at the Qingdao Road on Yangtze River and the finish line is at the Wuhan Happy Valley. The marathon always takes place in April but online registration for the same can start as early as late December.

This is ranked as one of the top marathons in China. It runs along the impressive Yangtze River Bridge. There are so many sights to take in. This is no surprise, as Hubei Province is known for its great tourist attractions. The first Wuhan marathon was in 2016. The race attracts a lot of attention and for the last three years, it has become a sort of a gala for Hubei Province with thousands of Chinese citizens registering for it every year.

To run the Wuhan Marathon, you can register for the full marathon, which runs on fairly flat terrain with most of the parts paved with asphalt. You may also register for the half marathon that is 21 km or the health run at 13 km. Among some of the attractions that you can catch on the marathon route include the Revolution Museum, Miaoshan Scenic Area, Shahu Bridge, Eagle Bridge and many more. 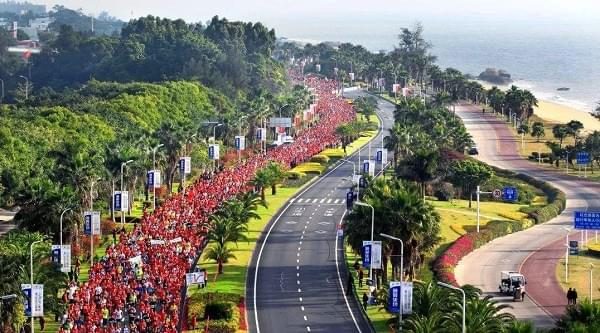 The marathon takes place in the Xiamen City in Fujian Province. Part of the reason why it is so popular is that it runs alongside the coast for a big part. Since its establishment, there have been a few instances of cheating especially in 2010. Some runners used public transport in some parts of the race. This was attributed to students looking for bonus points for their higher education exams.

One of the reasons why this race is so popular is because it is the first to take place in the world every year. This marathon attracts a lot of attention and it has really opened people’s eyes to the beauty of Fujian Province. The prize is also quite high, at $1 million for the winner. 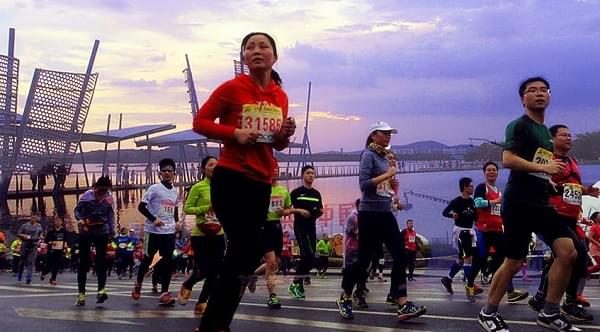 Having got into its sixth year since establishment in 2019, this is among the most prominent, top 10 marathons in China. It takes place every year in March, in the early sunshine and flowers of spring. The registration for this marathon starts in December most of the time, but it is a good idea to check the dates in advance. There are 30,000 spots and so the participants are picked by lottery. Every year, this marathon attracts so many people every year.

The Wuxi Marathon is under China Athletics Association. It has also been awarded the Gold Label Road Race, thus setting it up even to gain more popularity. When registering, you are required to show your previous times and experience in other marathons. The route of the marathon is usually closed to traffic during the race day.

Wuxi has many attractions, so you will have a great time. Besides, the weather is quite good in March. The Hangzhou Marathon was established in 1987 and as such, it is little wonder that the race is in the list of the top 10 marathons in China. The marathon program is divided into full marathon, half marathon at 21.09 km, short marathon at 13.8 km, mini marathon at 6.8 km, family run at 1.2 km and couple run at 4.5 km.

The China Athletics Association has ranked this marathon in the top domestic contests. Every year, 32000 participants take part in the event, coming from as many as 50 countries. The route is set alongside attractions such as West Lake, Qiantang River, Tea Gardens, Scenic Spot and many more. In fact, the beauty that is found along this marathon route makes it quite popular all over the world.

Hangzhou Marathon takes place in April every year, around the middle of April. The weather is good by then. This is why it attracts so many people. Many people who have taken part in the Hangzhou Marathon say that it is better organized than even the Beijing Marathon. The entry fee is also very fair as compared to other marathons. 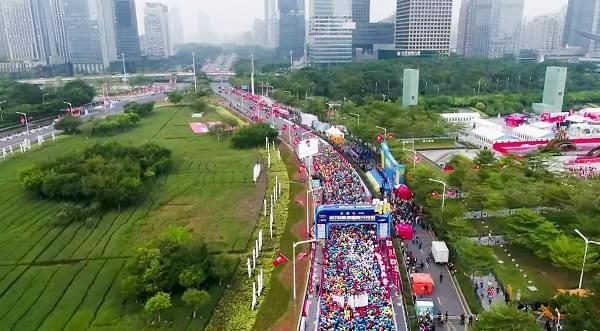 The Shenzhen International Marathon takes place in December every year. It is held in Shenzhen, the capital city of Guangdong Province in China. Guangdong is one of the financial hubs in the southern region of China. Luckily, in December, Shenzhen is just mildly cold and so it makes a perfect long distance running environment.

The marathon program involves the full marathon itself, the half marathon and a shorter, 6 km race. According to the China Athletics Association, the Shenzhen International Marathon is ranked among ten of the best marathons in China.

Some of the most notable personalities to win this marathon are from Ethiopia and Kenya, two of the endurance running powerhouses in the world. As the marathon enlists 30,000 participants only, they use a lottery system to pick the athletes. 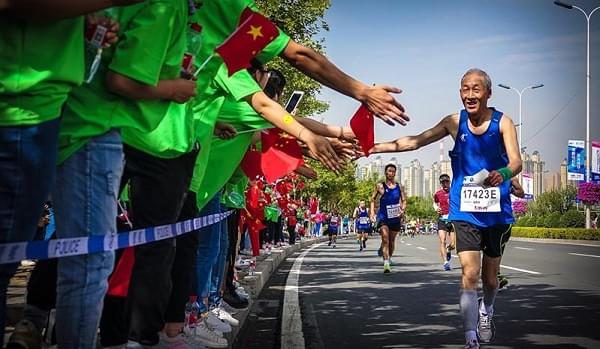 If you would like to challenge yourself beyond your imagined limits, take part in the Lanzhou International Marathon. The course of the marathon route is set alongside the Yellow River. Beautiful artificial and natural scenery surround it and the air is always so nice.

The Lanzhou Marathon was established in 2011. It has been held in June or July ever since, every year. It starts at the Red Square and the finish line is at Jinchang North Road. 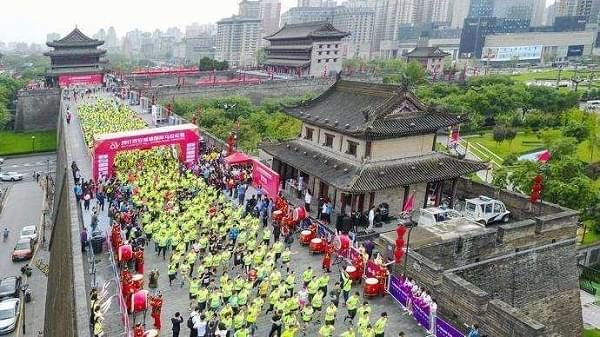 The Xi’an International Marathon is also called the Shaanxi City Wall International Marathon. The entire marathon route is on the wall of Xi’an City in China. This is one of the timeless cities in China, steeped in time and history. It was the seat of power through various dynasties. This city is also the birthplace of Chinese civilization. It is little wonder then that this marathon attracts so many people from different countries. We all want to learn a piece of the Chinese history.

The first Xi’an International Marathon was in 1996 and ever since, there has been a marathon every year in September. However, please note this is not a full marathon. It is a half marathon at 13.7 km. Participants must be at least 16 years. There is also the 5 km race that does not have age limitation.

You have seen the top 10 marathons in China. If you look carefully, it is as if there is a marathon for every month. These marathons run through some of the epic cities in China, and most of them are just road races with little to no elevation gain. The courses have been crafted to pass by natural sceneries, notable monuments and parks in the cities. China  is a country of many great things and marathons are some of the ways to see the country.