Poetry has been a favorite literary genre in China for thousands of years. And many of the Chinese poems are about love. Here I compiled a number of well-known love poems from China’s long literary history, though some of them were written by unknown author, all these poems remain alive and on people s lips since they were written. 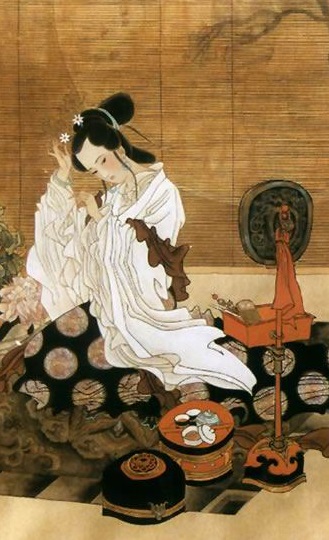 Ten years, dead and living dim and draw apart.
I don’t try to remember,
But forgetting is hard.
Lonely grave a thousand miles off,
Cold thoughts, where can I talk them out?

Even if we met, you wouldn’t know me,
Dust on my face,
Hair like frost.

In a dream last night suddenly I was home.
By the window of the little room,
You were combing your hair and making up.

You turned and looked, not speaking,
Only lines of tears coursing down.

Year after year will it break my heart?
The moonlit grave,
The stubby pines.

The poem was written around 1075, when the poet Su Shi dreamed about his wife. He married his wife Wang Fu in 1054 at her fifteen. Unfortunately his wife died in 1065, 11 years after they get married. The next year he took her body back to his homeland Sichuan and buried it in the family graveyard, planting some pines around the tomb. He loved his wife so much and composed this poem to express his feelings. 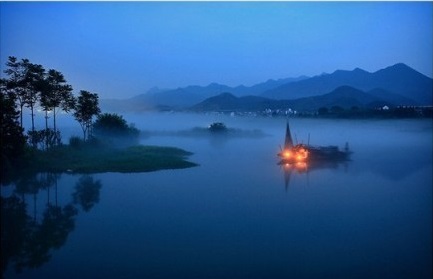 I live upstream and you downstream,
From night to night of you I dream.
Unlike the stream you are not in view,
Though both we drink from River Blue.
When will the river no more flow？
When will my grief no more grow？
I wish your heart will be like mine，
Then not in vain for you I pine.

Li Zhiyi is one of Su Shi’s disciples and a member of the literati group “Yuanyou poetic style”. This poem surrounds the Yangtze River to express men and women’s sentiment of lovesickness. 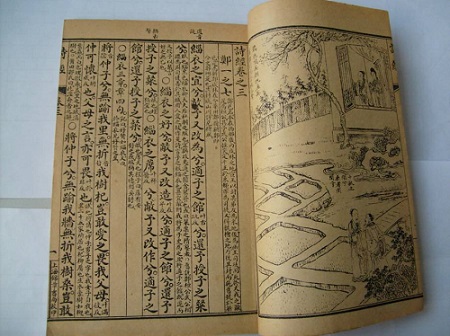 The drums are booming out;
We’re busy all about,
Building walls high and low.
Alone I southward go.

I follow Sun Zizhong
To fight with Chen and Song.
I cannot homeward go;
My heart is full of woe.

Where stops and stays our force?
I’ve lost my battle horse.
O where can it be found?
It’s buried underground.

“Meet or part, live or die,
We’ve made oath, you and I.
Give me your hand I’ll hold,
And live with me till old!”

With my wife I’ve long parted.
Can I live broken-hearted?
Alas! the oath we swore
Can be fulfilled no more.

This poem expresses homesick mood of officers and soldiers in the battlefields. The verse “Give me your hand I’ll hold, And live with me till old!” has become the best love oath for later generation lovers. 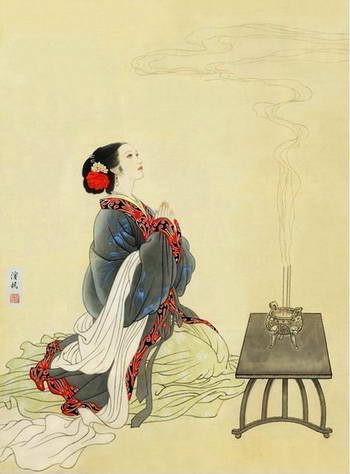 I want to be your love for ever and ever,
Without break or decay.
When the hills are all flat,
The rivers are all dry.
When it thunders in winter,
When it snows in summer
When heaven and earth mingle,
Not till then will I part from you.

The poem comes from Yuefu folk poems of Han Dynasty.  The hero takes an oath that: Even if the seas go dry and rocks crumble, her love remains firm. The poem is a woman`s warm confession to her lover.

5. On And On, Going On And On《行行重行行》 (Eastern Han Dynasty) 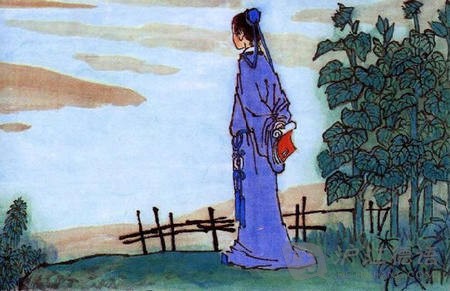 On and on, going on and on,
Away from you to live apart.

Ten thousand miles and more between us,
Each at opposite ends of the sky.

The road I travel is steep and long;
who knows when we meet again?

The Hu horse leans into the north wind,
The bird nests in southern branches.

Shifting clouds block the white sun,
The traveler does not look to return.

Thinking of you makes one old,
Years and months suddenly go by.

Abandoned, I will say no more,
but pluck up strength and eat my fill.

The poem is about solicitude, departure and scourge of war during the turmoil years of the late Eastern Han Dynasty. The poem is full of a woman’s deep concern over her husband in the foreign land. 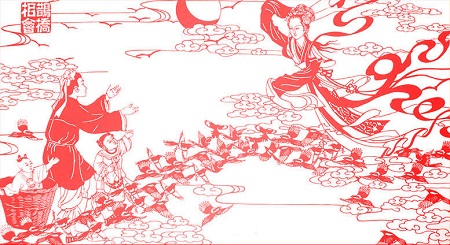 Clouds float like works of art,
Stars shoot with grief at heart,
Across the Milky Way the Cowherd meets the Maid.
When Autumn’s Golden Wind embraces Dew of Jade,
All the love scenes on earth, however many, fade.
Their tender love flows like a stream,
Their happy date seems but a dream,
How can they bear a separate homeward way?
If love between both sides can last for aye,
Why need they stay together night and day?

The poem name Immortals at the Magpie Bridge derives from the myth of the sincere love between the Cowboy (Niulang) and the Weaver (Zhinu), who are separated by the Heavenly Queen with the Milky Way and permitted to meet once a year at the bridge formed by the magpies. The poem borrows this traditional love story to express human‘s joys and sorrows. 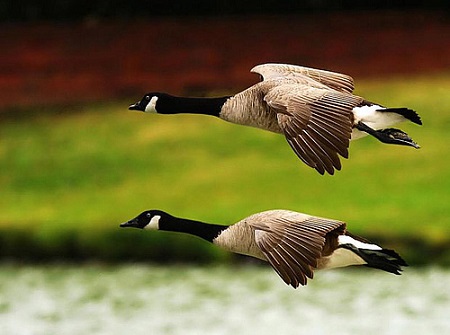 Among the earthly mortals, I ask: what is Love
That engages couples through life and death?
This flying pair, travelling from south to north,
Had old wings, which survived several summers and winters.
Staying paired is happy,
But to sever, bitter: a trap in itself where devoted lovers
Still long to be trapped. He must have had a thought:
For whom shall I trail a forlorn shadow flying over
Ten thousand miles of grey clouds
And mountains of night snow?
On this road by Fen River, the old pipes and drums
Are gone. Only bleak smoke and vast woods are left.
Vain to evoke the ancient ghosts. The Mountain Spirit
Also wails in vain. Heaven envies the geese,
Not believing they’ll return to dust like orioles
And swallows. There they’ll remain, for a thousand
Autumns, awaiting the poets of later generations
Who are coming, rhapsodizing and quaffing
Just for a view of the wild geese’s tomb.

In the fifth year of Taihe, Yuan Haowen went to Bingzhou to attend an imperial examination. On the way a bird hunter said to him that, he caught a wild goose and killed it. Its partner kept soaring, wailing above and finally killed itself by plunging on the ground. When hearing this touching thing, the poet buried the pair of geese beside the Fen River and named it “The Wild Geese’s Tomb”, he then composed this poem to praise their loyal love.

8. I Was Not When You Were Born, You Were Old When I Was Born.《君生我未生，我生君已老》(Tang Dynasty) by an unknown writer The poem, with plain language, expresses the author`s pity and nostalgia to a much older lover.

9. Though On The Deceased Life《离思》by Yuan Zhen (Tang Dynasty) Insignificant waters become,
When sailings to the oceans abound.
Misty clouds circle mount Wu around,
That’s the best scenery I have ever found.
Many a flower I pass by,
Second looks I bother not to try,
For pilgrimages as a monk I vie,
Still remember the lover I once had.

The Tang Dynasty poet Yuan Zhen composed this poem for his lover Cui Yingying. The line “Insignificant waters become, when sailings to the oceans abound. Misty clouds circle mount Wu around, that’s the best scenery I have ever found.” expresses that the poet will ever fall in love with other woman except for Yingying. While I lean against the banister of a tall tower,
The breeze gently blows.
As I look into the distance,
The end of Spring arouses melancholy in my mind.
Surrounded by dewy grass at sunset,
I wonder who is able to understand my longing.
I would rather drink to intoxication.
One should sing when one has wine in hand,
But drinking to escape offers no reprieve.
I do not mind that my clothes are getting looser.
My lover is worthy of desire.

The poem cleverly combines lonely feelings in a foreign land with yearning for the lover, showing the hero’s determined character and persistent attitude, successfully portrays the image of a woman who misses her lover far away.