China is a poem kingdom, many great poems have significant impacts on Chinese world, and here is a list of 10 most influential Chinese poems. In addition to being written well, these poems are also easy to understand and remember for common people. 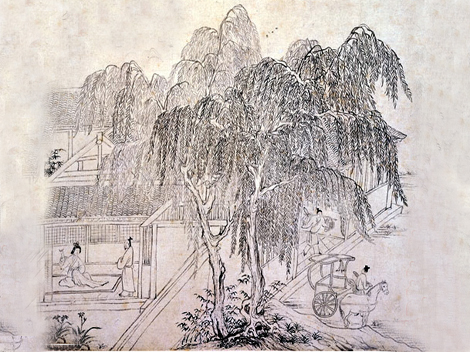 Beside my bed a pool of light—
Is it hoarfrost on the ground?
I lift my eyes and see the moon,
I bend my head and think of home.

Thoughts in the Silent Night is one of the most well-known Chinese poems written by Li Bai. This short poem uses only a few words and is quite concise in wordage, but it is endowed with the passion that stimulates the bottom of one’s heart and arouses an intense feeling of nostalgia very naturally.

2. A Poem By A Leaving Son— by Meng Jiao

A Traveler’s Song
By Meng Jiao
Translated by Liu Jianxun

The thread in the hands of a fond-hearted mother
Makes clothes for the body of her wayward boy;
Carefully she sews and thoroughly she mends,
Dreading the delays that will keep him late from home.
But how much love has the inch-long grass
For three spring months of the light of the sun?

A Traveler’s Song is one of the most famous classical Chinese poems. The poem was written when 50-year-old poet Meng Jiao was appointed as a county official in Liyang, Jiangsu Province. He then brought his mother to live in the county. This poem presents people how mighty the love of a mother is and at the same time expresses his gratitude to mother’s sincere love. This poem has been passed down from one generation to another and almost every Chinese knows this poem. Especially the last two verses are now a common metaphor of motherly love.

Boundless grasses over the plain
Come and go with every season;
Wildfire never quite consumes them —
They are tall once more in the spring wind.
Sweet they press on the old high- road
And reach the crumbling city-gate….
O Prince of Friends, you are gone again….
I hear them sighing after you.

Bai Juyi is one of the most prolific and popular poet of all Chinese poets. Bai wrote this famous poem in an examination at the age of 16. The first four sentences focus on the beauty of resisting grass life; the last four sentences praises the sincere friendship. The poet combined the occasion of departure with natural surroundings to create an extended metaphor to describe profound friendship.

People burn the beanstalk to boil beans,
The beans in the pot cry out.
We are born of the selfsame root,
Why should you torment me so much?

The poem was written during the Three Kingdom Period when Cao Pi (brother of Cao Zhi), the Emperor of Wei, was in power. Cao Pi suspected that his brother Cao Zhi was trying to usurp his throne. Consequently, Cao Zhi was summoned to the court and ordered to compose a poem within seven strides so that Cao Pi was convinced of his innocence. Cao Zhi made it, and Cao Pi became so flustered that he spared his brother.

This poem compares relation of beans and beanstalk to relationship of the two brothers, and likens burning the beanstalk to boil beans to elder brother maiming younger brother, reflecting the brutal struggle within the feudal ruling group and the poet’s difficult situation and gloomy cynical feelings.

5. On The Stork Tower —- By Wang Zhihuan

On The Stork Tower
By Wang Zhihuan

The sun beyond the mountains glows;
The Yellow River seawards flows.
You can enjoy a grander sight，
By climbing to a greater height.

This poem was written by famous Tang Dynasty poet Wang Zhihuan. It describes what the poet sees and feels about when he ascends the Stork Tower. In the first two lines, he shifts his eyes from the sunset beyond the mountains to the Yellow River, which flows out of sight eastwards towards the sea. Then he writes the famous line “You can enjoy a grander sight, By climbing to a greater height.” which blends landscape, emotion and philosophical thinking in the short verse.

6. On The Mountain Holiday Thinking of My Brothers In Shandong — by Wang Wei

All alone in a foreign land,
I am twice as homesick on this day
When brothers carry dogwood up the mountain,
Each of them a branch-and my branch missing.

This poem is one of the masterpieces of the Tang Dynasty poet Wang Wei. It describes the an intense feeling of homesickness of a distant wanderer. In the first two lines, the poet shows how lonely he is in a foreign land, especially on festive occasions he thinks of his family far away more than ever. Then he shifts his focus to his hometown, thinking that when his brothers at home step to high places and collect the dogwood, they will miss him too.

Guan! Guan! Cry the fish hawks
on sandbars in the river:
a mild-mannered good girl,
fine match for the gentleman.

A ragged fringe is the floating-heart,
left and right we trail it:
that mild-mannered good girl,
awake, asleep, I search for her.

I search but cannot find her,
awake, asleep, thinking of her,
endlessly, endlessly,
turning, tossing from side to side.

A ragged fringe is the floating-heart,
left and right we pick it:
the mild-mannered good girl,
harp and lute make friends with her.

A ragged fringe is the floating-heart,
left and right we sort it:
the mild-mannered good girl,
bell and drum delight her.

This poem is the first poem of ancient anthology Shijing, the earliest collection of Chinese poems comprising 305 works of the Zhou Dynasty (1122-256 B.C.). It is a love poem describing that a young noble falls in love with a good and fair maiden collecting edible water plants, and hopes to marry her.

8. A Quatrain in Summer — by Li Qingzha

A Quatrain in Summer
By Li Qingzhao

This poem was written by Li Qingzhao, a famous poetess who lived in the Southern Song dynasty (1127- 1279). The poem proposes her own viewpoint clearly in the first two lines: One as a human being should be an outstanding talent and make contributions to the country; if one has to die, he should make sacrifices for his country, becoming a ghost hero after death. The poetess felt very disappointed when the rulers of Southern Song just fled as the country was invaded aliens, disregard for common people. The poetess also used Xiangyu, a hero who refused to flee and committed suicide with dignity, to satirize the rulers, and at the same time she hoped heroic figures could recover the country’s lost territory.

9. Farewell To Vice-Prefect Du Setting Out For His Official Post In Shu — by Wang Bo

By this wall that surrounds the three Qin districts,
Through a mist that makes five rivers one,
We bid each other a sad farewell,
We two officials going opposite ways….
And yet, while China holds our friendship,
And heaven remains our neighbourhood,
Why should you linger at the fork of the road,
Wiping your eyes like a heart-broken child?

This poem was written by Wang Bo in Chang’an City when his friend surnamed Du was leaving to take office as a county official in Sichuan province, the poet saw him off in Chang’an City and presented his friend this farewell poem. The poem describes their profound friendship and also expresses his sincerity and encouragement to his friend.

Farmers weeding at noon,
Sweat down the field soon.
Who knows food on a tray
Thanks to their toiling day?

This poem was written by the Tang Dynasty poet Li Shen who is known for expressing in-depth coverage of the rural life in his poems. The poem talks about farmers’ hard work for every single grain. The first two lines describe farmers keep toiling away despite the blazing heat at noon. The following two lines connect food in plate with farmers’ hard work. If they don’t toil, then who knows what you would eat.

Above are the 10 most famous ancient Chinese poems, do you know any other Chinese poetry that you like? please let us know by leaving a comment below.