15 Pictures of Traditional Chinese Clothes in Song and Tang Dynasties

In Chinese history, the Tang Dynasty (AD 618-907) was a period of unity and prosperity when the politics and economy were highly developed. Women’s dress and personal adornments of the Tang Dynasty were outstanding in China’s history. The clothing materials were exquisite, the structure was natural, graceful and elegant, and adornments were splendid. Below are some pictures showing traditional clothes during that time: 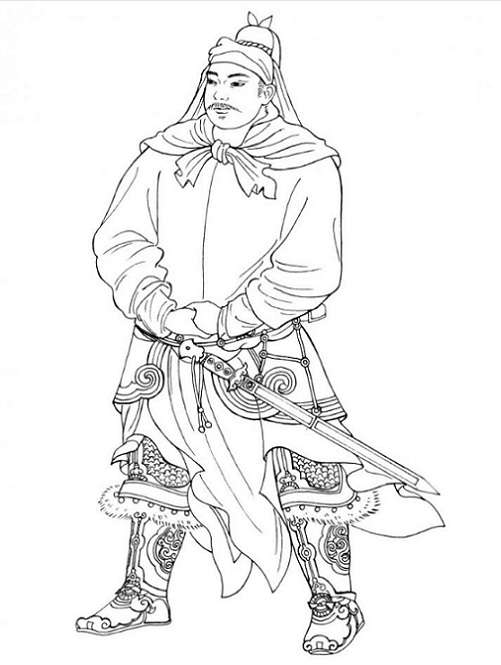 Tang Dynasty. This Tang general is shown in fur-trimmed leg armor worn over elaborately decorated boots. He wears a headdress and has tied a scarf around his shoulders. His flowing skirt allows for freedom of movement. 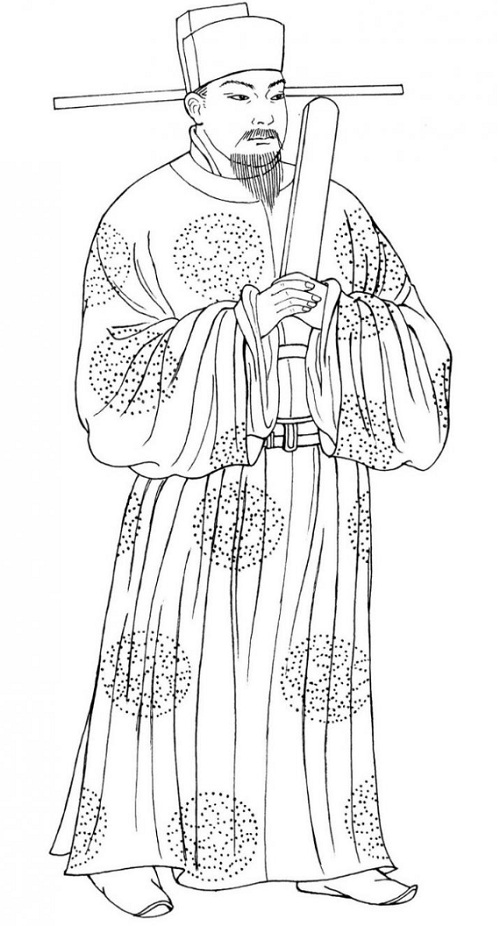 Tang Dynasty. A Tang official wears a hat denoting his rank as a civil servant. His simply cut robe is held at the waist by a belt. 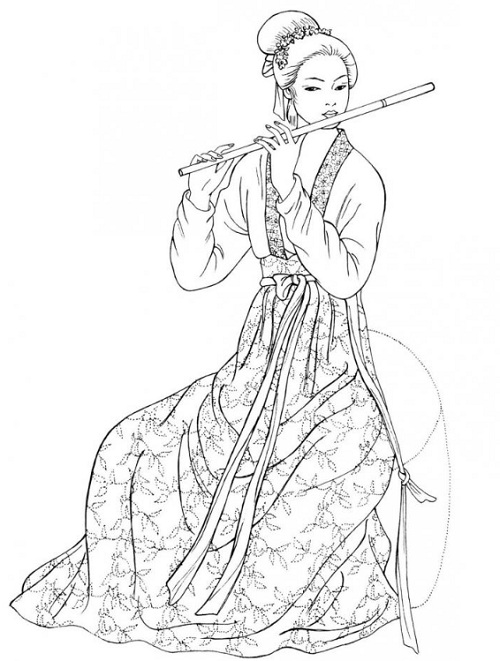 Tang Dynasty. This musician performs for a formal occasion at the palace. Her high-waisted full skirt is tied with a long, flowing sash. Ornaments and a bow decorate her hair. 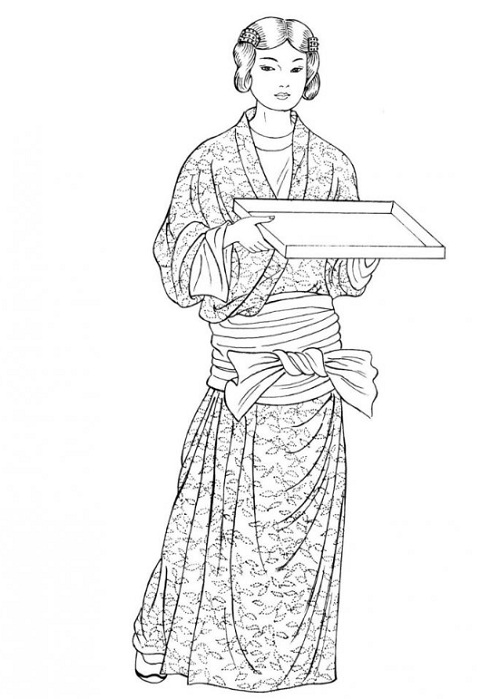 Tang Dynasty. This young woman`s long robe is held in place by a wide sash wrapped around her hips and securely knotted. Her hair has been divided into two sections, twisted, and fastened with barrettes. 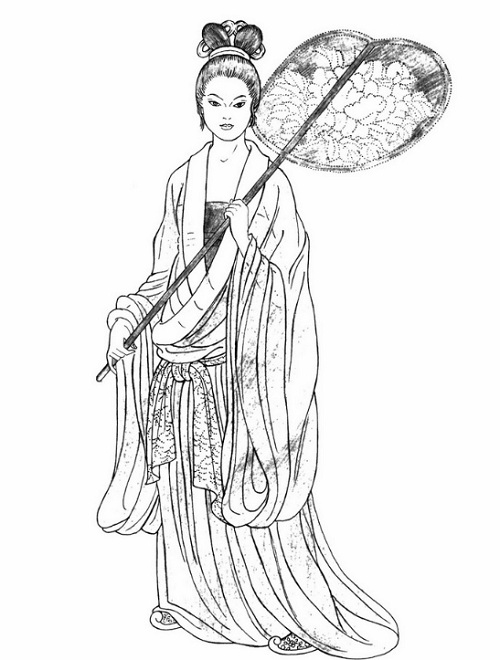 Tang Dynasty. This upper-class woman wears a strapless high-waisted dress under a transparent robe. The robe is secured by a knotted sash. She carries a fan, a popular accessory. Her hairstyle was known as “hundreds of flowers”; hairpins and other implements were used to construct the elaborate hair arrangement. The curled toe slippers show a Persian influence. Tang Dynasty. These women of the imperial palace wear the popular dress of the day – a high-waisted dress with full, flowing skirt. The long scarves that they have draped over their shoulders flow down their backs. Te woman on the right wears the “double bun: hairstyles both hairstyles are adorned with ornaments containing precious gems.

Costume of the Song Dynasty (960-1279) was simple and natural, reflecting the development tendency of the era.Costume in the period carried on features of costume in the Tang Dynasty (618-907). Women’s costume mainly included blouses, jackets, coats, skirts, robes, short gowns and long coats. Most garments without belt and buckle had an erect collar and were buttoned down the front, and protective collar was sewn on the outer edge at the neckline. Collar edges and sleeve edges of all clothes that have been excavated were decorated with laces or embroidered patterns. Such clothes were decorated with patterns of peony, camellia, plum blossom, and lily, etc. 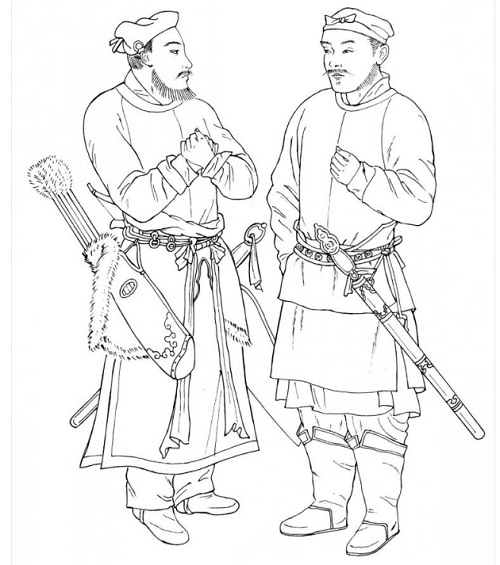 Song Dynasty. These military men wear outfits consisting of layers in different lengths, worn with a tunic and trousers. Both wear boots and caps. Their swords, arrow bags, and bows are suspended from their belts. 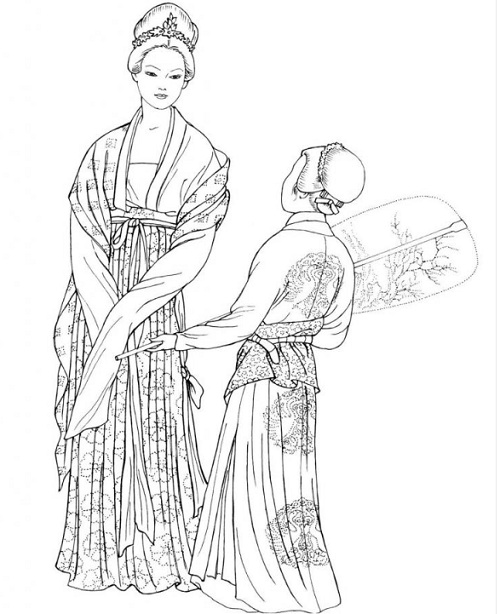 Song Dynasty. This woman and young girl are members of an imperial official`s household. The woman wears a high-waisted skirt over a robe, as well as a flowing shawl-like scarf. She obviously belongs to the noble class, as the extremely long sleeves of her gown would make any sort of work impossible. The girl wears an abbreviated wrap skirt over her long robe, which displays the popular “double bird” motif. The open side seam reveals several under-skirts. The girls carries a massive fan and both wear decorative hair ornaments. 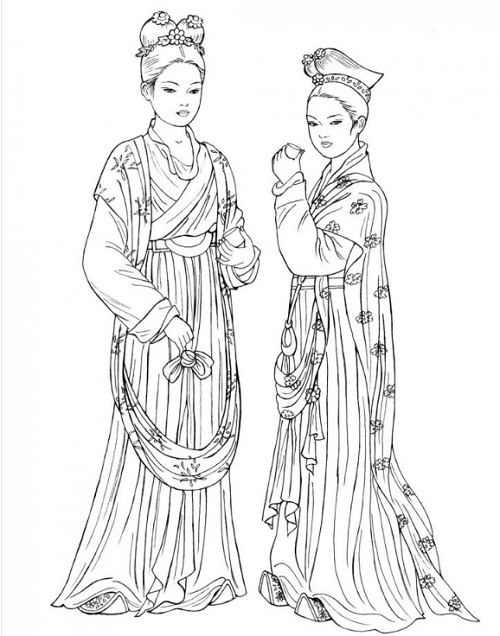 Song Dynasty. These upper-class women wear outfits consisting of a robe, skirt, long scarf, and embroidered silk shoes. The scarves fall low on the figure. Both wear their hair padded to achieve the preferred shape and height. Their hairstyles are decorated with ornaments made of gold and gemstones. They wear upturned embroidered slippers. 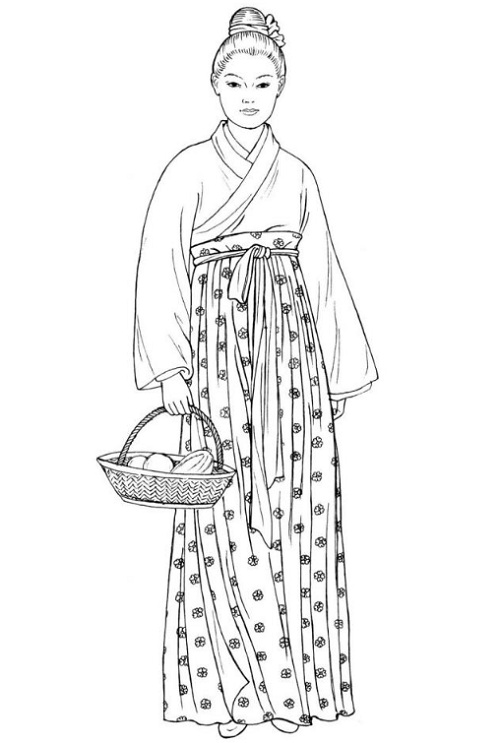 Song Dynasty. This commoner wears everyday attire consisting of a warp robe and a high-waisted long skirt circled at the waist by a knotted sash. Her single-bun hairstyle is decorated with a simple ribbon. 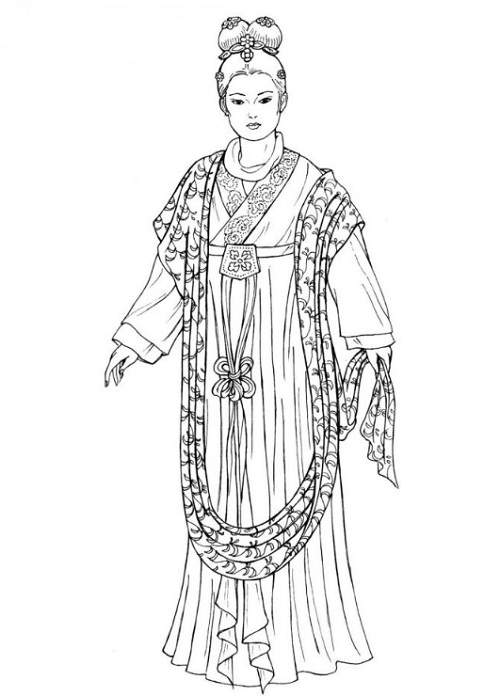 Song Dynasty. This upper-class woman wears a narrow-sleeved wrap top over an underskirt. The long skirt is held at the waist by an embroidered pocket. The long scarf serves as a shawl. Her”double bun” hairstyle is adorned with jewels and clasps. Song Dynasty. This scholar, known for his paintings and calligraphy, wears a simple wrap coat bordered with a band decorated with a “knot” pattern. An apron-like scarf drapes the front of his coat, which is held in place by a cord. 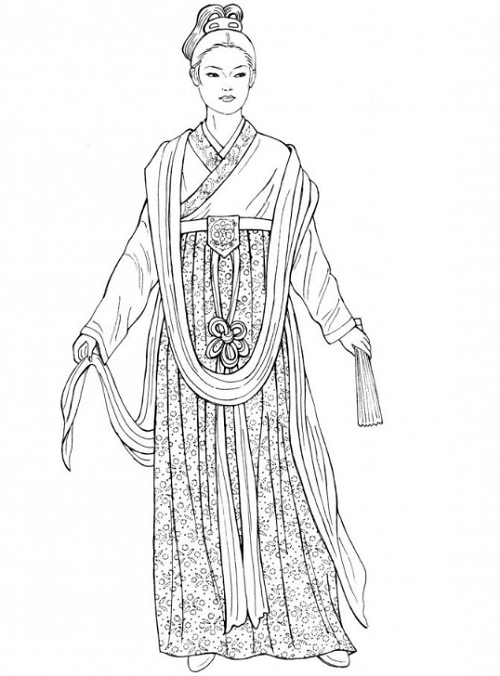 Song Dynasty. This woman`s wrap top has a neckband embroidered with a floral design. The pocket at the skirt`s hih waist is also embroidered with colorful silk thread. The knotted ornamental sash flows downward to flutter with her every movement. She holds a pleated fan. 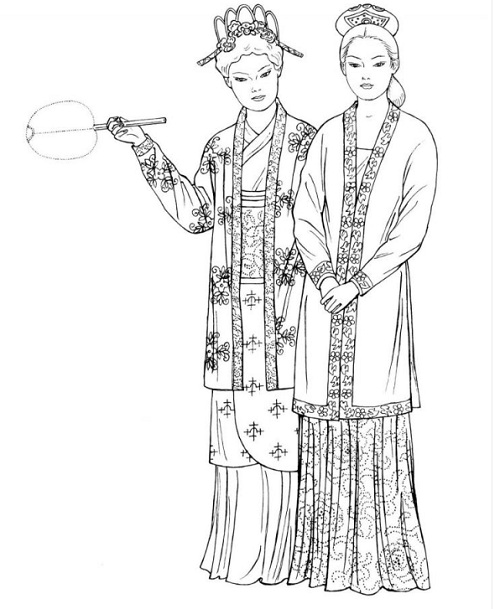 Song Dynasty. These upper-class women wear closely fitted jackets with narrow sleeves. The short wrap skirt worn by the woman on the left is paired with a long skirt. The woman on the right displays a low neckline under her jacket. Embroidered bands of floral designs decorate the front, sleeves, and hems of both jackets. The women`s embroidered silk hair ornaments are embellished with jewels and gold or silver details. 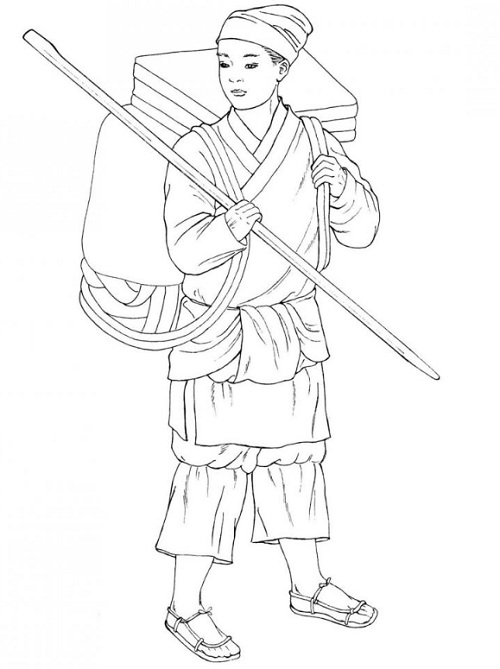 Song Dynasty. This commoner`s robe is brought upward and tucked in at the waist for ease in walking. The pants have been shortened as well. Sandals and a hat made from a piece of cloth complete this outfit.