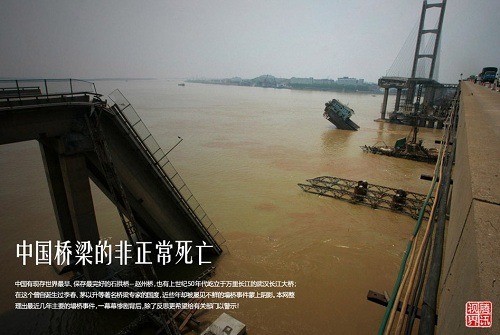 In China, it seems every year we can see a bridge collapse, here is a list of bridge collapse accidents in recent years, after seeing many tragedies I think Chinese government really should take measures to avoid it. 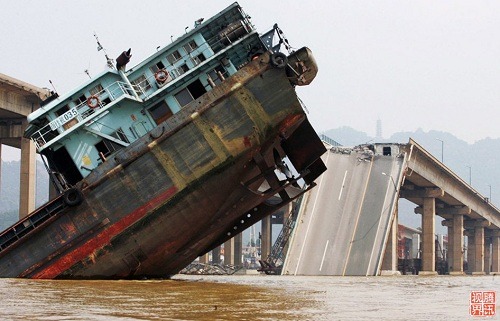 The Jiujiang Bridge collapsed on June 15, 2007. after a cargo vessel ploughed into a section of the 1,600-meter-long bridge. Four cars plunged into the river and nine people were killed.

Jujiang Bridge was open to the traffic in 1988; it is an important transport hub linking eastern and western Guangdong. Test in 2005 showed that everything is all right with the bridge. 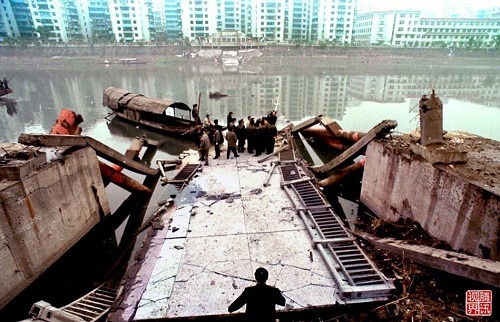 The 180 metre-long rainbow bridge collapsed in Qijiang county on Jan 4th 1999, three years after it had been built by a private contractor. Forty people died and 14 people were injured in the tragedy.

The investigations showed that the steel bridge was of inferior quality, and that the accident resulted from official dereliction of duty and mistakes in engineering and construction. 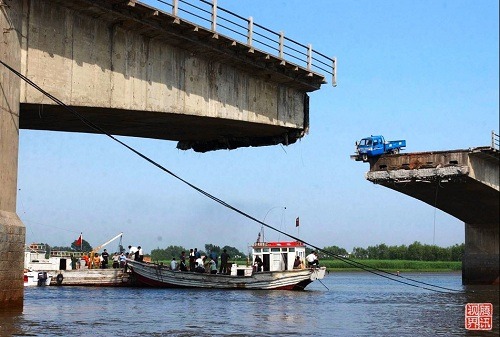 Tianzhuangtai Bridge in Panjin City, northeast China’s Liaoning Province, suddenly collapsed on June 10, 2004.  Several vehicles fell down from the 500-meter bridge over the Liaohe River. Two people who survived the tragedy by swimming ashore, the casualty is unknown. 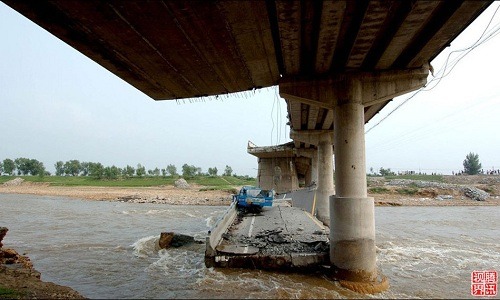 Xiongyue Bridge was broken under the impact of the flood on August 2, 2006, two piers collapsed and two bridge plates fell down. In the accident, a car fell into the river, and one of victims was saved from water, but the other one was missing. Aug. 14, 2007, the 328-meter-long, 42-meter-high Tuojiang River Bridge in Fenghuang County, in western Hunan Province, collapsed on Monday afternoon when an estimated 123 workers were dismantling its steel scaffolding. Construction began in March 2004 and had been scheduled to open to traffic at the end of the month. October 23, 2007, Inner Mongolia Baotou viaduct deck tilted, two heavy trucks and a car slide to under bridge, causing the railway line under the bridge break, the accident caused no casualties. 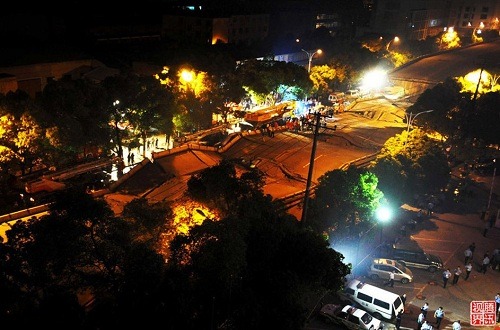 May 17, 2009, Hongqi viaduct in Zhuzhou, Hunan collapsed, nine people were killed and 16 injured, 24 vehicles were damaged. 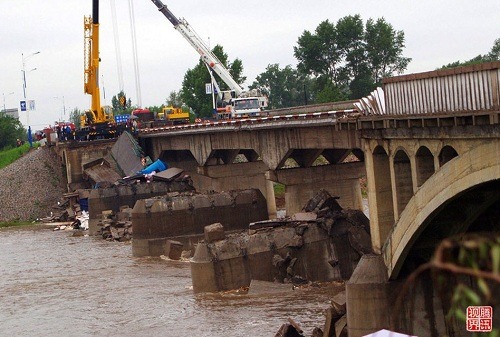 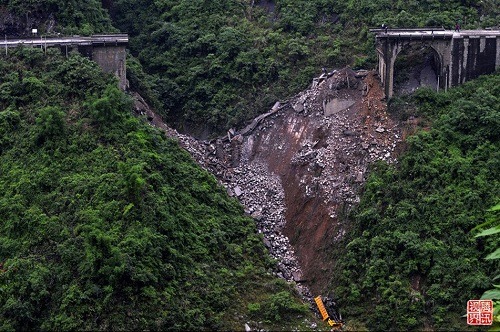 May 27, 2010, Chongqing Pengshui red mud Trough Bridge collapsed, an engineer vehicle fell under the bridge, the driver was injured. The bridge was put into use in 1998. 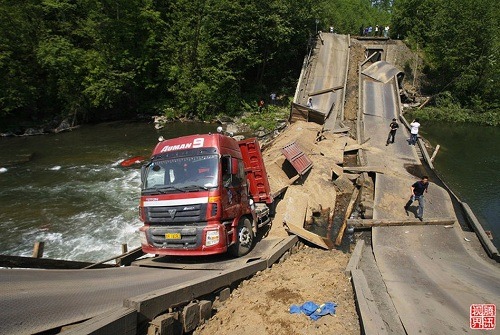 June 8, 2010, the bridge suddenly collapsed, a moving truck and a taxi fell into Jinjiang River, six people were injured. July 24, 2010, A big bridge in Tangying village of Luanchuan Coutny in Luoyang collapsed, people on the bridge were all plunged into the flood. As of August 5, 52 people were confirmed dead, 14 missing. August 19, 2010, Baoji-Chengdu Railway Shiting River Bridge was washed away by the flood. A passenger train K165 from Xian to Kunming was stopped immediately, No accident casualties. August 19, 2010, Chengdu Chongzhou Laodingjiang Bridge collapsed, more than 100 meters of the bridge fell into the river, a person killed, 1 missing. The bridge was built in the 1960s with a total length of 200 meters, the collapse was due to days of heavy rain. April 12, 2011, Xinjiang Korla Peacock River Bridge collapsed, no casualties, the bridge was completed on August 1, 1998 and known as “the first cross-river inthe Northwest.” July 14, 2011, Fujian Mount Wuyi Mansion Bridge wholly collapsed, a tourist bus fell down the bridge, one person was killed and 22 injured. The construction started in1996, and the bridge was open to traffic in 1999 with a total investment of about 17 million Yuan.