Top 5 Reasons Why Table Tennis is So Popular in China

Its June 17th, 2016, more than 300 million Chinese have tuned in to watch the table tennis singles final at Rio Olympics between the two local heroes – Ma Long and Zhang Jike.

The streets, schools and even factories in china are mostly deserted.

Over 2000 Chinese fans have flocked in the stadium (max seating capacity was 3000) to watch the final.

The reception is no less in grandeur than any celebrity rock star would get or maybe more.

Such is the craze of table tennis in China, and such is the respect these players are showered with.

The match was close, one which went till the last set. Flying Dragon AKA Ma Long eventually won but not before a tough fight by his compatriot. 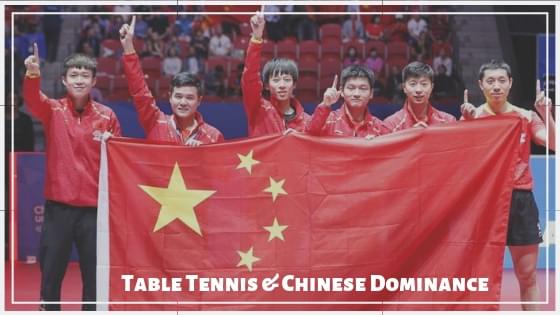 In the last three Olympics, China did a clean sweep, winning all table tennis Gold medals. And seeing the form of their top players, it seems the history may be repeated as well at the 2020 Olympics.

So this leads to a crucial question – Why Chinese are so good at table tennis?

Table tennis is more than a sport in China. It’s no less than a religion for most. It holds political, historical and cultural significance and played a vital role to embark the rise of China globally.

In this post, we’ll look at why China dominates table tennis and what makes this sport so popular in China?

1.    National Sport and a chance to connect to the rest of the world

Mao Zedong, the Chairman of People Republic China, declared Table tennis as the National sport in 1949. The ‘Great Leader’ believed table tennis could bring the people of the country together, boosting their confidence and at the same time help china to connect with the rest of table tennis playing nations.

The low-space and low-maintenance sport was perfect for the impoverished nation. The bet paid off and may very well have changed the history of China.

Soon, Table tennis became a national identity, a symbol of patriotism and swept across the whole nation. From the crammed streets, to farms, schools or offices, you can a find table tennis almost everywhere.

China is the world’s most populous country, with over 1.4 billion people inhabiting the nation and table tennis is there most popular sport. And as per a report over 10 million people play the sport almost every day. Just imagine the kind of talent pool the nation has in store. It no surprise that china produces world’s best players.

70% of china’s land reserve is either forest or hill. And the rest 30% is what houses its colossal population. That’s why you don’t find many sports stadium in the nation. Sports like baseball, football or for that matter basketball did not take off in the country because of the poor infrastructure and need of large sporting arena.

In contrast, table tennis requires minimal space, is relatively maintenance-free and is quite cheap to get started.

Table tennis came into being in China when they did not have any other sport to play. In the early 1950s, the country was in shams, and people did not have much to do around that time.

In 1959, Rong Guotuan won the world’s first table tennis championship, becoming China’s first sporting champion.  With the win, China once a neglected sporting nation came into the world centre stage. The success of Rong gave confidence to Chinese parents to pursue their kids to take up the sport.

While the rest of the world was preparing and excelling in multiple sports, but china for the greater part of mid 90’s focused on one and only one sport – Table Tennis.

While the whole world may think the China’s large size or its early mover advantage of was its primary reason for its success but it’s partly true. It definitely plays a role, but one of the more and not often discussed factors is there culture and discipline.

Table tennis is a fast sport requiring robotic muscle memory to play strokes with a great deal of accuracy. To develop such Jedi skills, it requires years and years of practice and a disciplined effort.

Chinese are known to be hard-working, very disciplined and organized in their efforts because these virtues are deeply embedded in their culture. And this makes China a powerhouse of table tennis.

But the rest of the world isn’t far behind

While China still dominates table tennis, but other nations like Japan, Taipei not far behind. In the recently concluded T2 diamond tournament in Malaysia, the 17-year-old Lin Yun-Ju from Chinese Taipei, won the championship, quashing the Chinese supremacy.

When someone tells you table tennis is just a sport, do tell them for China this sport is a symbol of hope, prosperity and a pulsating connection to the global stage.

Kevin James is the co-founder of PingPongBros – A website dedicated to reviewing sports equipment and sharing tips and tricks for players to get better at their game. He is also an ITTF certified coach and a professional table tennis player himself.