Xinjiang Uygur Autonomous Region, located in the northwest of China, is praised highly as the “Home of Singing and Dancing” for its unique folk culture and custom. It is a must-see area for many travelers, here are 10 reasons to visit Xinjiang: 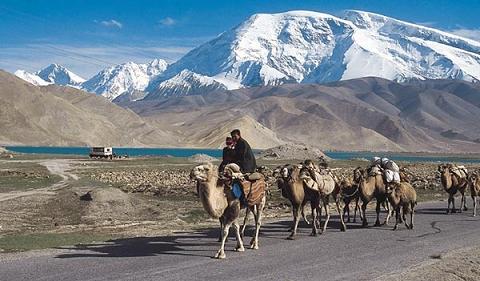 1)  Minority Culture – If you want a glimpse of China like you have never seen before, then the Xinjiang province would be a great destination to begin to appreciate the ethnic diversity in China. Xinjiang literally translates into Mandarin as “New Frontier”, but offers a window into ancient trade routes in desert landscapes.  Home to Chinese Muslims, Xinjiang boasts a total of 9 million Uighurs, which constitute over half of their population.

3) The Food – Pomegranates grown in Kashgar are supposed to be the sweetest in the world. Pomegranates sold in August through December will undoubtedly be the ripest and if you need to quench your thirst pomegranate juice is widely available. In addition, rice is not the staple food as found elsewhere in China; it is the noodle that makes up the staple of Uighur cuisine.  Lamb kebabs laden with spices can fill the stomach of any hungry traveler in need of grub.

4) Urumqi – The capital of Xinjiang, Urumqi, bustles with a newly found cosmopolitan feel with high-rise corporate offices and hotels.  Its name literally means “Beautiful Pastures” although it lies right in the center of a mountainous circle.  Two parks, Hongshan and Renmin, create an idyllic setting to observe the daily lifestyle of Urumqi natives.

5) The Architecture – Mosques and minarets can be seen throughout the Xinjiang province, providing religious sanctuaries for the Muslim population.  Minarets are tall spires with onion shaped tops and can be free-standing or a part of a mosque.  Imams, the leaders of prayer in Muslim religion, climb the staircases of the minaret and use it to call prayer to the people below.

6) The Lakes – Three hours east of Urumqi, melted snow created Tian Chi Lake. The name Tian Chi translates into Heavenly Lake; it is an alpine lake, meaning that it 5,000 feet above sea level.   Cypress trees, alpine meadows and snow-capped mountains create a beautiful and unforgettable vista.   Kanas Lake lies on the northern tip of Xinjiang and borders Mongolia and Kazakhstan.  Nomadic herdsmen of Turk and Kazak ethnicity populate the valley nearby.

7) Desert Landscapes -Deserts make up roughly two thirds of the Xinjiang province.  The Talkaman desert is bordered on the north and south by two routes of the Silk Road and located in the Tarim basin.   Travelers and merchants sought to avoid the desert, which maybe explains why the name Talkaman can be translated to mean the “Point of No Return.”

8) Kashgar – Kashgar is a city located in the far west of Xinjiang, and is the spot where two routes of the Silk Road intersect from bordering the Talkaman desert.  A trading hub for the Silk Road, Kashgar has many unique and interesting places to visit and tvhe Chinese government plans to make large investments to restore it as a trading mecca. Ancient Kashgar City provides a look into the old, mud thatched homes of the Uighur population.  The Sunday Bazaar pulls together Pakistanis, Uighurs and Tajiks, all offering different knick-knacks, travel souvenirs, as well as live animals.

9) Ethnic Tension – While being in the middle of a violent ethnic riot may not be on any travelers top ten list, it is important to view and understand the ethnic tensions that will undoubtedly make headlines in China for years to come.  As the Han majority seeks to assimilate the Mandarin language, Chinese culture, and Beijing policies into ethnic minority enclaves, one can appreciate the perspectives and issues of Uighurs as they try to protect and preserve their unique civilization.

10) Travel by Train – Traveling by train to Xinjiang along the Lanxin (see: Lanzhou – Xinjiang ) railway allows you to see the landscape of the Chinese countryside and meet ethnic Chinese en route to your destination.  The Lanxin railway follows the path of the ancient Silk Road and runs from Lanzhou, Gansu to Urumqi.

The above article is offered by China Newz, a blog that covers all things China, including politics, history, economics and culture.