You might need these words when you are watching a Chinese reality TV series, watching the news, or when you are in an awkward situation in China. If you’re a 老外 in China, you might have heard them already or even needed them yourself. We have listed the 10 most useful phrases for you to learn to have a good argument in Chinese. 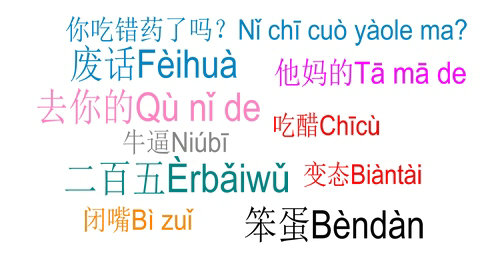 The meaning of this word is ‘nonsense’. If you don’t believe what someone says, or strongly disagree, you say: ’请不要说废话’ (Qǐng búyào shuō fèihuà). It means: ‘please don’t talk nonsense.’

There are many ways to translate this to English, and which way is correct depends on the specific context but the meaning stays the same. In English we would say ‘shut up!’, or ‘go to hell!’. A sentence you could say when someone talks nonsense is ‘去你的！你说的全是废话!’(Qù nǐ de! Nǐ shuō de quán shì fèihuà)!

This is derived from it’s extremely rude brother, which you will have to look op yourself, and means ‘damn!’. The reason that this is less rude is because it doesn’t imply the verb that describes what you do with someone else’s mother, but in essence it means the same thing.

This is a very common insult and is similar to the word ‘idiot’. You can use it in the same situations as in English, so you call someone 二百五 when he or she does or says something stupid.

This is similar to 二百五, but is less offensive. It basically means the same thing, but literally means ‘dumb egg’ which is still kind of cute.

If you would translate this sentence to English, it would be ‘Did you take the wrong medicine?’. In other words, what’s wrong with you?

闭Means ‘to close’, and 嘴 means ‘mouth. In other words, ‘shut up’. A common sentence during an argument is 闭上你的乌鸦嘴(Bì shàng nǐ de wūyāzuǐ).

By saying this, you mean something is extremely amazing. It is mainly used when young guys are together drinking beer and someone makes a hilarious joke, they mean that he is ‘freaking amazing!’. When they say 装牛逼 (zhuāng niúbī) they mean 假装牛逼 (jiǎzhuāng niúbī), which means pretending that you are amazing, but you actually are not.

This is a cool one, because it originally means ‘pervert’, and was (and still is) used to describe someones perverted thoughts. Nowadays, you can call your friends BT to say that he or she is naughty, or a weirdo in a positive way.

This wraps up our top 10, there are many more so make sure you keep surfing on Chinese websites and listening to what Chinese people use to learn as many insults as possible, because studying doesn’t end when you leave the classroom and you never know when you’ll need them!

Written by Ivan Chao, Marketing Assistant at That’s Mandarin Chinese Language School. Founded in 2005, TM has campuses in Beijing, Shanghai Chengde and Online. We specialize in individual and small group Chinese language teaching and we apply our unique methodologies in each class. We work hard to design courses that are entertaining and to teach them in such a way that you learn Mandarin faster and retain it longer. Our campuses are located in each city’s downtown, allowing ample opportunity for trips, excursions and cultural activities. Our schools also offer weekly cultural events which focus on fun, learning, and being social.