Cui Jian is regarded as the pioneer of Chinese rock and he is called the “China’s godfather of rock”. His 1986 song “Nothing to My Name” made him become famous overnight. His other representative songs include: “Rock and Roll on the New Long March”, “Fake Monk”, “Huafang Guniang” and others. Here is a list of his most famous rock songs. Let me know which one you like best by commenting below. 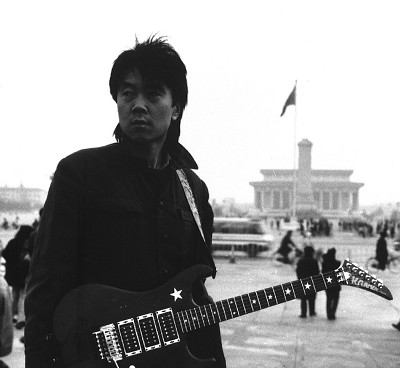 “Nothing to My Name” is Cui Jian’s signature song, which was sung at Beijing Gongti Stadium concert in 1986 and made him become famous among young people. In the song Cui sings desire and dashed hopes of young people at that time, later the song became unofficial anthem for student pro-democracy demonstrators in 1989. Check the lyrics here.

Cui Jian pursued individual self-worth during that era, the song expresses his desire to abandon the old order and find an independent personality and live in freedom. See lyrics.

The song “Huafang Guniang” tries to tell the relationship between freedom and love, and how to decide between the two most beautiful things. It is difficult to make a choice, but he finally choose freedom. See lyrics.

4. Rock and Roll on the New Long March / 新长征路上的摇滚

“Rock and Roll on the New Long March” is one of his famous songs and also the name of his first album, the album includes his most famous song “Nothing To My Name”. See lyrics.

“A Piece of Red Cloth” sounds like a love story but actually it portrays the special time of chaos and the beliefs of the youth in the 1989 Tiananmen demonstration. Lyrics.

7. Balls Under the Red Flag / 红旗下的蛋

This is his most radical and rebellious representative work.

This is another radical and rebellious representative work of Cui Jian.

“The Last Shot” was originally inspired by the 1979 Sino-Vietnamese War.

This song can vividly describe himself and his music. His music is just like a sharp knife, which can stab disguise of many hypocritical reality.