In long Chinese history, there are a lot of great art works. All of them are priceless treasures since the origin of Chinese civilization. After numerous civil war, all these paintings are now being collected in different museums nationwide. Here collected are the top 10 ancient Chinese paintings:

One copy is now held in the Palace Museum in Beijing, and another one is now at the Freer Gallery in Washington, D.C. The third was in Liaoning Province Museum. This ancient painting is a large scroll that should be “read” horizontally, depicting the love story between the poet and the nymph, from their meeting to their parting. 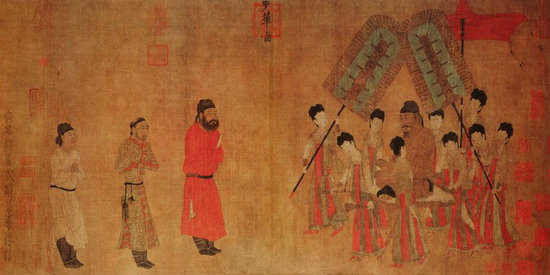 “Emperor Taizong Receiving the Tibetan Envoy” painter Yan Liben was one of the most revered Chinese figure painters in the early years of the Tang dynasty (618–907). The painting is a work of both historical and artistic value, collected by the Palace Museum in Beijing. The painting is 129.6 cm long and 38.5 cm wide, drawn on the tough silk, depicting the friendly encounter between the Tang dynasty and Tubo in 641.

“Noble Ladies in Tang Dynasty” are a serial of paintings drawn by Zhang Xuan and Zhou Fang, two of the most influential figure painters during the Tang dynasty (618–907), when the paintings of noble ladies became very popular.

The paintings depict the leisurely, lonely and peaceful life of the ladies at court, who are shown to be beautiful, dignified and graceful. Zhang Xuan was famous for integrating life likeness and casting a mood when painting life scenes of noble families. Zhou Fang was known for drawing the full-figure court ladies with soft and bright colors. The paintings are spread around in the collections of museums nationwide.

Painting of “Five Oxen” is currently collected in the Beijing Palace Museum of Forbidden City. Mounted by Hemp paper, sized 28.8cm*139.8cm, which was drawn by Prime Minister of Tang Dynasty Mr. Han Huang. (723-787 AD). Han was born in Chang’an and strong in drawing Oxen. The painting “Five Oxen” is Han Huang’s most vivid one, it was early or late collected by most of famous people like Zhao Gou (Song Emperor), Qian Long (Qing Emperor), etc.

Today, visitors are able to found this painting in the museum of Beijing Forbidden City and it is so far considered as the first-of-the-kind famous in drawing OX in such a vivid and pictorial way historically.

Painting of “Han Xizai Gives A Night Banquet ” is collected by Beijing Palace Museum of Forbidden City, which is mounted by Silk and sized in 27.9cm* 69cm. it was from the great painter in Five Dynasties, Gu Portrayed scene where giant Han family hosted their even banquet with plenty number of guest together in the form of long scroll painting. And this is considered as the most famous and valuable one that created in the Five Dynasties.

This Scroll painting is not just a description of private life, but more importantly it reflects the lifestyle of that particular era. 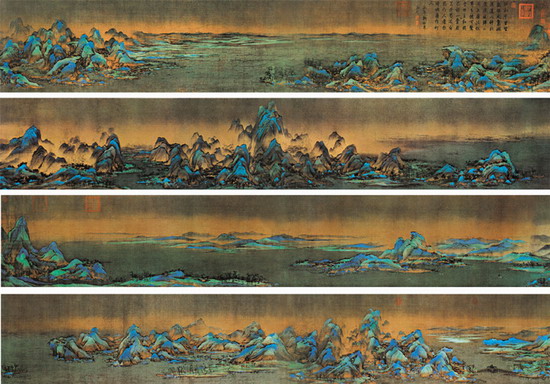 Wang Xi Meng, a teenage artist during the Song dynasty of China, painted A Thousand Li Of Rivers and Mountains in 1113. This painting is regarded as one of the “Ten Greatest Paintings of Ancient China” and depicts an idealized vision of China. The 37-foot long canvas depicts magnificent landscapes, remarkable architecture, exotic animals, and humans living in harmony and peace. His vivid and glorified portrayal of China conveys a sense of prosperity and power of the country.

The hand-scroll of painting, measuring 24.8cm wide and 528.7cm long, is painted on silk with a light color background. It is now kept in the National Palace Museum in Beijing.

8. Dwelling in the Fuchun Mountains 《富春山居图》

Dwelling in the Fuchun Mountains is one of the few surviving works by the painter Huang Gongwang (1269–1354) and it is considered to be among his greatest works. Painted between 1348 and 1350, the Chinese landscape painting was burnt into two pieces in 1650.

9. Spring Morning in the Han Palace《汉宫春晓图》

“Spring Morning in the Han Palace” is considered as the first long scroll heavy meticulous style of Chinese painting mounted in silk, in its dimension of 37.2cm × 2038.5cm. It was was drawn by Qiu Ying. He is a representative painter of the Ming Dynasty, together with Shen Zhou, Wen Zheng-ming and Tang Yin were later known as the “Four Giants of Ming”.

“Spring Morning in the Han Palace” is the most outstanding copy during Qiu’s lifetime, and artists right after him was hardly go beyond with better works. 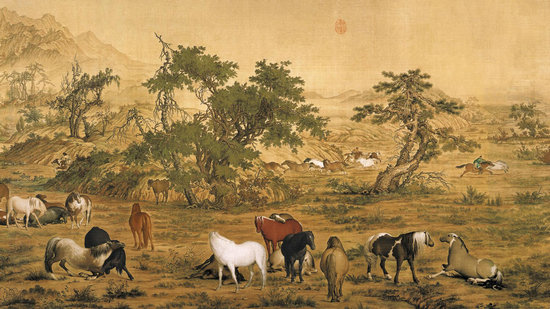 “One Hundred Horses” was drawn by Lang Shining in Qing Dynasty (1644-1911). Lang was a missionary from Italy with birth name Giuseppe Castiglione. Working as a court painter in China for over 50 years, his talent in painting was regarded highly by Chinese emperors Kangxi, Yongzheng and Qianlong. He helped to create a hybrid style that combined the Western realism with traditional Chinese composition and brushwork.

The Hundred Horses” was work on paper, sized 102cm*813cm, and it is Currently collected in the Taipei Palace Museum.