The 7 Differences Between Western and Chinese Culture

Have you had any misunderstandings with Chinese? The cultural differences between the west and the east will cause different attitudes and practices to certain things. So it is necessary to enhance communications and understanding of both sides. To make you get along with Chinese easier, I summarize the 10 different habits and preferences between foreigners and Chinese. 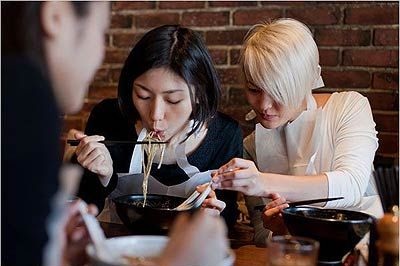 “People are iron, rice is steel, and you’ll feel hungry without a meal”.  Food is an important part of our daily life. There are many differences between westerners and Chinese on the dinner table.

If you have dinner in a westerner’s home, they may just prepare one dish on the table, they also like to say: “The dish is quite good; or the dish is quite famous”. While Chinese people will say: “Not much food, just take some”.

Foreigners will let guests choose their favourite food on the table. While Chinese, in order to show their hospitality, prefer to use chopsticks to refill other’s bowl.

When visiting westerners’ home, the house owner does not like guests to see here and there in their house as this may invade his privacy. While Chinese like to walk around the house and see every room and this often raise a friendly topic to talk about.

In the West, visitor takes only a bottle of wine for gift. Because they will drink the wine brought by the guest, if the guest takes two bottles of wine, it seems to indicate that the host is an alcoholic and the visitor is afraid that one bottle of wine is not enough for the host.

But Chinese people like to send gifts in pairs, for example, two bottles of wine, two cartons of cigarettes. First, this is to show that the visitor is not stingy person; second, even numbers are seen as good in Chinese culture.

When receiving gifts, westerners want you to open the gift in front of him and give some praise. While for Chinese, in order to show that the receiver is not a greedy person, he is accustomed to put the gift aside quietly and unpack the gifts after then guest leaves.

Westerners are accustomed to say thanks to family members or friends for their help, and they expect to hear the polite language “thank you” or “please” and the like. However, Chinese people believe that they do not have to say “thank you” to family or friends as this seems to alienate their relations.

Westerners generally bathe in the morning and then go to work refreshed. Chinese usually bathe before going to bed at night. Bathe will loosen up their muscles and minds, and besides in the morning they are in a hurry and don’t have time to shower.

Westerners cook with detailed recipes and do precisely in accordance with the recipe requirements; they also use kitchen measuring cup and spoons to weigh ingredients. While most Chinese people cook dishes based on their experience and preferences, rarely completely follow recipes step by step.

When getting older, Westerners go to live in a nursing home, and few live together with their children. China’s traditional culture places great emphasis on supporting parents, “While one’s parents are alive, one should not travel to distant places.” is one of the old Chinese sayings. Until now, sending elderly parents to a nursing home is considered to be a deed of impiety