While most wine lovers know that the most famous wine comes from French regions such as Bordeaux, Burgundy, and Province, this often not the case for tea. Most tea drinkers don’t even know the fact that the finest tea comes from China, let alone the famous regions.

Well known Chinese tea regions have unique weather conditions that is a prerequisite for growing high quality tea. In addition, the farmers in those regions have inherited thousands of years of growing knowledge that other regions lack. Especially tea picking and processing are important for the end result. Hence, tea lovers should learn more about the origin of Chinese tea, as this will help in making buying decisions. 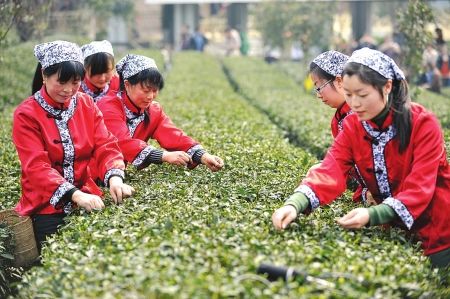 1. “Jiangbei” – North of the Yangtze River

‘Jiang’ means ‘river’ and ‘bei’ means ‘north’. Thus, Jiangbei refers to the large northern area of the Yangtze river. In this area Shandong, Henan, Gansu, Shaanxi and northern parts of Anhui and Jiangsu are the main tea producing provinces.

With a relatively low average annual temperature of around 15 degrees Celsius, this region the most suitable for growing high quality Chinese green tea. This is because low temperatures allow the loose green tea leaves to grow slowly and obtain more flavor.

One major challenge that tea growers are facing in the past decade is that some regions are coping with drought and uneven rainfall. Still, this region produces a number of famous Chinese teas such as Henan’s Xin Yang Mao Jian and Lui An Guapian from Anhui.

2. “Jiangnan” – South of the Yangtze River

Jiangnan refers to the Southern area of the Yangtze river, covering provinces Jiangxi, Zhejiang, Hubei, Hunan and southern parts of Anhui and Jiangsu. This doesn’t include other provinces in the more southern part of China though. This area has the largest tea production of China consisting of 2/3 of China’s total tea production. Compared to Jiangbei, this area has a higher average temperature. Therefore teas are often produced higher up in the mountains for cooler climates.

The area also enjoys four highly distinctive seasons with lots of rain in spring and summer followed by a dry autumn and mild winter. The area produces a diversity of green, black, oolong as well as scented teas. Dragon Well tea from Zhejiang and Bi Luo Chun from Jiangsu are the most popular teas that are well known in China and the rest of the world. Suzhou is the home of Bi Luo Chun with beautiful gardens where many tea drinkers gather for their favorite cup.

For tea lovers who are planning to travel to China, the Huang Mountain in Anhui will be a great place to visit with famous teas such as the Keemun, Huang Shan Mao Feng and Chrysanthemum flower tea. This trip could be combined with the nearby city Hanghzou, famous for its picturesque West Lake and home of Dragon Well green tea.

Tea regions in the Southern part of China include Guangdong, Fujian, Hainan, Guangxi. In addition, Taiwan could also be added to this group as it as a very similar climate. This area is famous for growing black, oolong and white tea. The rusty red soil of this region gives the teas a distinctive flavor that is mostly present in the famous oolong teas such as Da Hong Pao and Tie Guan Yin. While these two teas are the most popular in China, the area also produces a large amount of excellent Jasmine teas, which is one of the most well-known teas outside of China.

The yearly average temperature is approximately 20 degrees Celsius resulting in a growing season that is 10 months long, with each season producing a different taste of teas.

Last but not least. The Southwest region of China includes Yunnan province, which is considered by most tea historians as the birth place of tea. Sichuan, Guizhou and the Tibet Autonomous region are also part of this region. Post-fermented compressed teas (Pu erh tea cakes) are the specialty of this region. Besides compressed tea, the area also produces a the famous Dian Hong tea which is also known in the west as ‘Yunnan Gold’ and certain green teas.