Speaking good Chinese not only requires good pronunciation, but some local slang, new modern words (like Internet slang), and the famous chengyu (成语chéngyǔ, idioms) You really can make a good impression if, while talking to Chinese person, you use just one. But, they’re kind of messy to sift through on your own. So, we’ve gotten it down to our top 4 usable chengyu. Before too long, you’ll be making your Chinese friends super 吃惊 (chījīng – be amazed, surprised). 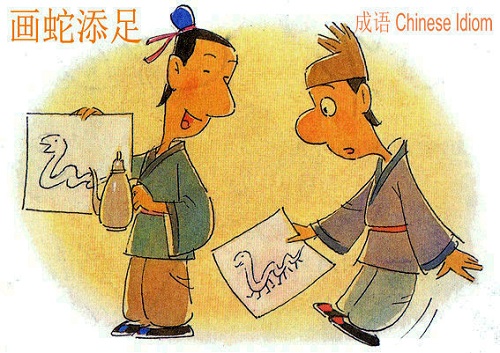 The story behind this idiom comes from the Romance of the Three Kingdoms. Han Xiandi (an emperor in the Han dynasty) was attacked by Li Cui and Guo Si. At that time, someone recommended him get help and get out of the woods. Han Xiandi agreed and ordered a person to send a message to Cao Cao. But before Cao Cao could receive the message, he had ordered his understrapper Xia Houdun to come to save Han Xiandi. As a result, Li Cui and Guo Si were destroyed by Cao Cao, who was conferred a higher title because of the victory. Since then, the use of “说曹操，曹操到” has been widespread.

There once was a farmer. He wanted his shoots to grow faster so badly that he decided to help them by pulling them up a little bit.
When he came home that day, he told his son and wife about what he’d done. His son got excited and ran over to the field to see, but when he arrived there, all he found were dead plants.
So now people say: “pull the shoots up to help them grow” when someone spoils things by getting too excited.

In the country of Chu during the Warring States Period, a man gave his servants a jar of wine after a ceremony. They didn’t think there was enough wine, so the servants decided to have a competition to see who would get to drink it all.

Whoever drew a snake the fastest would win the whole jar of wine. One of the servants was finished before anyone else, but he saw everyone else still working and he wanted to draw a beautiful snake too, but he also added feet to show off his drawing skills. Just then, another servant finished drawing his snake and snatched the jar. He began drinking and said, “How can a snake have feet? I win and you lose.”

This is exactly the same as the English saying and story! Just like Aesop, one day a foz saw a delicious bunch of grapes growing. But, when he tried to reach them, he couldn’t. He jumped and jumped but still couldn’t grab them. Finally, he fox got angry and decided the grapes must be sour. Then he left.

Well, there you go: four new idioms to practice on your friends. Use them wisely!

Written by Ivan Chao, Marketing Assistant at That’s Mandarin Chinese Language School. Founded in 2005, TM has campuses in Beijing, Shanghai Chengde and Online. We specialize in individual and small group Chinese language teaching and we apply our unique methodologies in each class. We work hard to design courses that are entertaining and to teach them in such a way that you learn Mandarin faster and retain it longer. Our campuses are located in each city’s downtown, allowing ample opportunity for trips, excursions and cultural activities. Our schools also offer weekly cultural events which focus on fun, learning, and being social.