In the network era, network buzzwords can be called the most representative language. As soon as one buzzword appears,  it will soon spread crazily on different social networks. Below is the list of the top 10 Chinese buzzwords of the year 2016. Come and check if you know any of them. 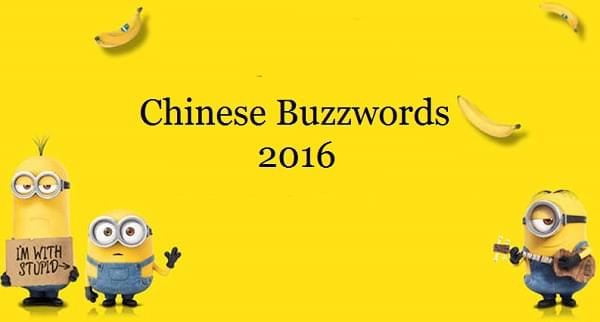 “蓝瘦香菇” literally means “blue thin mushroom”. However it has nothing to do with mushroom. Actually it is used to express “难受，想哭” meaning “feel bad, want to cry”. People crates this buzzword just because they similar pronunciation in a local dialect from Nanning, Southern China. This buzzword comes from a video in which a young expresses his sad feelings of a bad date. He repeatedly murmured how bad he feels with this phrase and then inspires Chinese netizens to create this buzzword.

“小目标” means a “A small goal”. It is a common phrase in Chinese language, but it soon becomes a hot internet buzzword after China’s richest man Wang Jianlin, the founder of Dalian Wanda Group, said “You shouldn’t be that ambitious. Set a small goal first, like earning 100 million yuan ($15m).”

“老司机” originally means the driver who have rich driving experience. It becomes famous with a song named “老司机，带带我” meaning “Give me a ride, skilled driver”. Now it is used to refer to the people who are experienced and have various resources in certain fields.

“撩妹” means “hit on sb” or “flirt with sb”. it became popular in China with the hit Korean drama Descendants of the Sun in which Song Joong-ki make use of various ways to pick up Song Hye-kyo.

“宝宝” means “Baby”. “吓死宝宝了” refers to “Baby is freaked out!”. Chinese girls often use this phrase to play cute. Later “宝宝” is used to adjust atmosphere in any context.

“没想到你是这样的” means “It didn’t occur to me that you are such a…”. It is used to express exclamation on many unexpected things that happen today.

“狗带” is homophonic with “go die”. It comes from an English Rap performed by Huang Zitao in a concert. In WeChat, micro blog and other Internet social networking platforms, people often use it to express discontent or frustration.